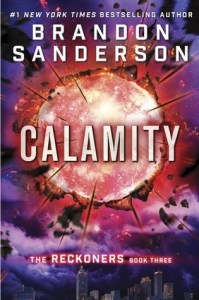 [Special thanks to the publisher for the review copy!]

When Calamity lit up the sky, the Epics were born. David’s fate has been tied to their villainy ever since that historic night. Steelheart killed his father. Firefight stole his heart. And now Regalia has turned his closest ally into a dangerous enemy.

David knew Prof’s secret, and kept it even when Prof struggled to control the effects of his Epic powers. But facing Obliteration in Babilar was too much. Once the Reckoners’ leader, Prof has now embraced his Epic destiny. He’s disappeared into those murky shadows of menace Epics are infamous for the world over, and everyone knows there’s no turning back. . .

But everyone is wrong. Redemption is possible for Epics—Megan proved it. They’re not lost. Not completely. And David is just about crazy enough to face down the most powerful High Epic of all to get his friend back. Or die trying.

I felt cowardly, but being part of a team was about recognizing when someone else could do a job better than you.
-David

The next quotes are all from David, and they’re all about sunrises.

You’re a sunrise. I spent ten years without sunrises, but I always remembered what they looked like.

I mean, who wouldn’t swoon over this?

And then I realized, a sunrise isn’t a moment. It’s an event. You can’t capture a sunrise because it changes constantly – between eyeblinks the sun moves, the clouds swirl. It’s constantly something new.

I’m glad you’re not the same, Megan. I don’t want you to be the same. My Megan is a sunrise, always changing, but beautiful the entire time.

This is the part when I wished I was Megan because GREAT USE OF METAPHOR THERE, DAVID. ❤ ❤ ❤ ❤

And the last two quotes are from Megan:

You know what’s funny? She actually said “I hope nobody ever quotes me on that one.”

We’ve been beaten, yes. But we haven’t failed, Jonathan. Failure is refusing to fight. Failure is remaining quiet and hoping somebody else will fix the problem.

And our girl here has become a hero for claiming her fears and choosing to be good. ‘Love you, Megan. ❤

I can’t believe this series is over. It’s been two months since I posted my review for Calamity, but my love for the three books, especially for my OTP (DAVID AND MEGAN FOREVER!) stays in my heart. This series has become special. If you haven’t started reading the books, I suggest you go to the nearest bookstore to grab your copies. Don’t miss this! 🙂

What do you think? Cancel reply

This site uses Akismet to reduce spam. Learn how your comment data is processed.

Search and you shall find…

Support me on Ko-fi!